What is a bitcoin hardware wallet, and what do they do? 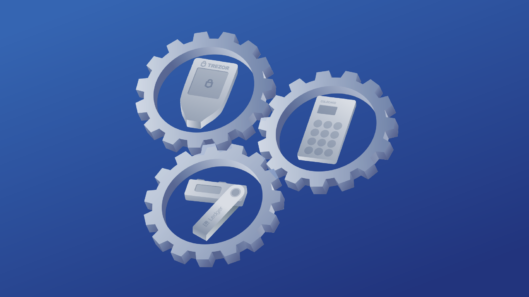 A bitcoin hardware wallet is a compact, dedicated device that generates and safely stores your bitcoin’s private and public keys offline.

Private and public keys are used by your chosen bitcoin wallet software to generate addresses, authorize spending, and safeguard access to your funds on the blockchain. Keeping your bitcoin keys offline is an integral part of bitcoin security that minimizes the risk of remote attacks and malware stealing your funds. Hardware wallets typically offer a variety of protections to prevent anyone with physical access to the device from accessing the keys inside.

What doesn’t a hardware wallet do?

The misconception that bitcoin is held on hardware wallets themselves is so widespread that many bitcoin industry folks recommend not using the misleading term “hardware wallet” at all. However, alternative and potentially more accurate names, such as “signing device” or “signer,” have been slow to catch on.

What does a hardware wallet do?

Let’s look at each of these functions one by one.

During setup, most hardware wallets generate a seed for you. This seed, which is a large, randomly-generated string of binary digits, can be represented in human-readable form as a seed phrase. The seed phrase is presented to you during setup as a list of 12 to 24 words. These should be carefully written down in order and saved in a secure offline location.

Hardware wallets generate seed phrases by generating a seed and mapping it to a list of 2,048 words. Hardware wallets use various methods to achieve randomness, such as random number generators (RNGs). In many hardware wallets, the RNG firmware runs on an isolated microprocessor called a secure element installed inside the physical hardware wallet. Other wallets use a combination of internal and external sources to generate entropy, the most popular example of the latter being dice rolls.

Once generated during initialization, your bitcoin wallet’s seed (and associated seed phrase) is stored inside the hardware wallet. If the hardware wallet uses a secure element, it generally resides there and cannot be exported from the device in plain-text form.

A hardware wallet’s limitations for exposing the seed are part of what make it secure. Hardware wallets are a form of “cold storage” because they store seeds in an environment that is isolated from the internet. Due to their limited attack surface, a hardware wallet can theoretically be connected to a virus-infected computer (not recommended!) and still protect your wallet’s seed.

To sign transactions, hardware wallets must communicate with the wallet software on a desktop or smartphone.  Depending on the hardware wallet model, it may connect to your device by USB, Bluetooth, or NFC. Fully air-gapped (i.e., not directly connected to the internet) solutions are also available, including using a camera, QR codes, or SD cards to transfer data between the hardware wallet and your device.

Connecting your hardware wallet to an internet-connected device may seem counterintuitive for an offline “cold storage” solution. However, as mentioned above, even with a wired connection, your wallet’s seed and corresponding public and private keys remain isolated, keeping them safe.

Typical steps for signing a transaction

Bitcoin transactions are immutable, which means if you send your bitcoin to the wrong address, it can be permanently lost. Thankfully, hardware wallets also allow you to check your bitcoin address on the device before sending funds. Checking your address on your hardware wallet teaches you three important things:

You should always check the receive or change address on your hardware wallet before sending meaningful amounts of funds to that address.

Most hardware wallets require the manufacturer’s wallet software to initialize the device, and many choose to use the OEM software for wallet functionality as well. Once initialization is complete, however, you can use third-party bitcoin wallet software alongside your hardware wallet to manage your bitcoin, if preferred. Popular options include Sparrow, BlueWallet, and our very own multisig wallet solution.

Still, there are nuances to be aware of: