What is bitcoin multisig escrow and how does it work? 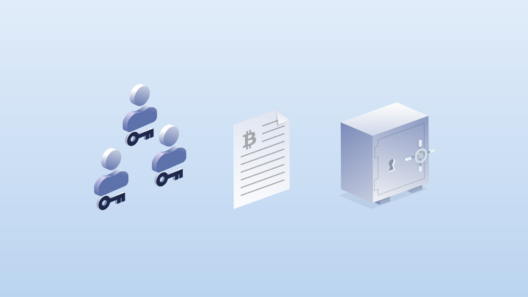 If you need to trade with someone when there’s uncertainty about them holding up their end of the deal, you might consider escrow, an arrangement that ensures the obligations of an agreement are met before payment is settled. Traditionally, this involves funds being held by a trusted third party, known as an escrow agent, who acts on behalf of the parties involved in the agreement. However, with bitcoin, a new type of escrow based on multisig is possible.

In a bitcoin multisig escrow, funds are deposited in a multisig wallet constructed using the public keys of the two parties participating in the transaction and one or more intermediaries. When the conditions of the agreement have been fully met, a quorum of keys can sign a transaction that releases the funds from the escrow.

Trustless and timely settlement makes multisig escrow a powerful tool for many escrow scenarios, and bitcoin multisig escrow takes advantage of the programmatic and immutable nature of bitcoin transactions to provide a secure and transparent escrow process.

The many benefits of multisig escrow over more traditional escrow arrangements include:

A bitcoin multisig escrow is created by combining the public keys of the participating parties using multisig wallet software such as Sparrow, Caravan, or other platform-specific tools. The multisig wallet is constructed using a predetermined quorum, or “m-of-n” configuration, where “n” is the total number of keys used to create the wallet, and “m” is the number of keys required to authorize a transaction.

Then, a deposit address is constructed for the multisig wallet, and funds are sent to this address. Funds can only be released when the required number of keyholders agree that the conditions of the escrow have been met and sign a transaction to disburse funds. No single party can move the funds without the authorization of one or more of the other parties.

The simplest structure for a bitcoin multisig escrow is a 2-of-3 multisig wallet in which one key is held by each of the two trading parties and one by an intermediary. In this scenario, the keys privately held by three individuals are combined to construct the wallet, with signatures from two of the three keys required to disburse funds. Let’s look at some example scenarios.

The purpose of this escrow is to protect both the buyer and the seller. For the buyer, the escrow ensures that the product is delivered on time and in good condition. For the seller, the escrow ensures that the final bill for the goods shipped is paid upon delivery. By using a bitcoin multisig escrow, the parties involved in the transaction can have confidence that their interests are protected and that the funds will be released in a timely and secure manner.

Example: Mary wants to buy a 20-unit apartment building from Jane. She deposits 10% of the purchase price in a multisig escrow account with the keys of Mary, Jane, and an intermediary. After an inspection of the property, numerous issues were discovered and Mary changes her mind about the purchase. The intermediary constructs a transaction for Mary to sign providing her with a full refund of the deposit.

With split settlement, an upfront deposit is made by the buyer which is all or partially refundable based on the terms of the escrow agreement. In this scenario, the intermediary judges what portion of the deposited funds should be refunded to the buyer and what portion should be settled to the seller, and signs transactions with each of the two parties accordingly.

Example: Fred agrees to rent an apartment from Bill. Bill requires a security deposit of two months’ rent. Fred, Bill, and an intermediary set up a 2-of-3 multisig escrow wallet. At the end of the lease, Bill assesses the condition of the apartment and determines that damage occurred equal to half of the security deposit. The intermediary constructs two transactions directing the release of the funds to Fred and Bill.

Bitcoin multisig escrow also plays a role in peer-to-peer protocols used for buying and selling bitcoin online, such as HodlHodl and Bisq.

In a contract initiated between two parties, a multisig escrow wallet is created by the intermediary protocol. Keys for the transaction are generated through the intermediary protocol to build the escrow address and for releasing bitcoin from the address. The buyer and seller are responsible for generating and securing their own keys (or passwords that act as keys).

In either case, a successful transaction that doesn’t need dispute resolution completes when the seller authorizes the release of the bitcoin from escrow, which transmits coins to the buyer. The third party cannot release funds without the consent of either the buyer or seller because the third party holds one or no keys to the multisig escrow wallet.

In a canceled transaction, the seller and the intermediary sign a transaction that sends bitcoin back to the seller’s wallet.

How to set up a multisig escrow

While there are many services you can use which do the heavy lifting for P2P buying and selling of bitcoin, not every transaction is a fiat-for-bitcoin trade. Thankfully, anyone can use bitcoin wallet software to set up a multisig wallet to use for escrow with another party and an intermediary.

We’ll cover these steps in greater detail in a future article, but the general process is usually the same:

After the wallet is set up, the buyer, seller, and intermediary coordinate to fund the wallet and release funds as appropriate for the circumstances of the transaction as described in the example scenarios above.

We used AI tools to help develop or improve this work. How do we use AI tools?